Rahvaalgatus.ee, a website that enables to collectively address the Estonian parliament ‘Riigikogu’ is launched! 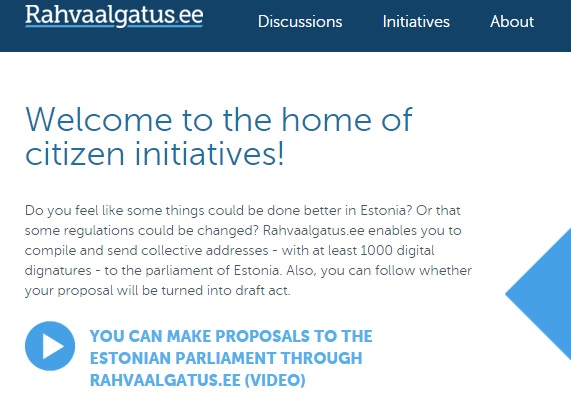 An environment for discussions and petitions rahvaalgatus.ee is open for public use and testing. The website offers a possibility to make collective propositions to the parliament in order to improve life in Estonia. To do this, a co-created initiative needs to gather at least 1000 digital signatures and has to be sent to the Parliament.

‘Until now, if one wanted to submit a petition, signatures had to be gathered on paper or digital signatures had to be presented on a memory stick. The new environment significantly simplifies addressing the parliament collectively, ‘ explained Teele Pehk, the director of The Estonian Co-operation Assembly. ‘The new web-platform is in the testing phase at the moment and awaits user feedback in order for us to make it completely functional.“, Pehk adds.

The right to address the parliament collectively also known as the right to petition took effect in Estonia in the spring of 2014 when the state made a proposition presented by The People’s Assembly into a law. By now 14 petitions have been presented and out of those 2 have become laws.

An expert of the E-Governance Academy and one of the leaders of the initiative that made collective petitions legal, Liia Hänni, emphasises: ‘Relevant societal issues need to be thoroughly debated at first and only then should we sign a collective petition. This increases the likelihood of the suggestion made in the co-created petition becoming a reality.’

Rahvaalgatus.ee is created and managed by the Estonian Co-operation Assembly in collaboration with the Chancellery of the Riigikogu. The platform is built using the open source software CitizenOS.com that is created by the foundation Let’s Do It! Creating a public initiative platform that enables discussions and co-creation is in the action plan for the partnership for open governance of Estonia 2014-2016 as a national priority.