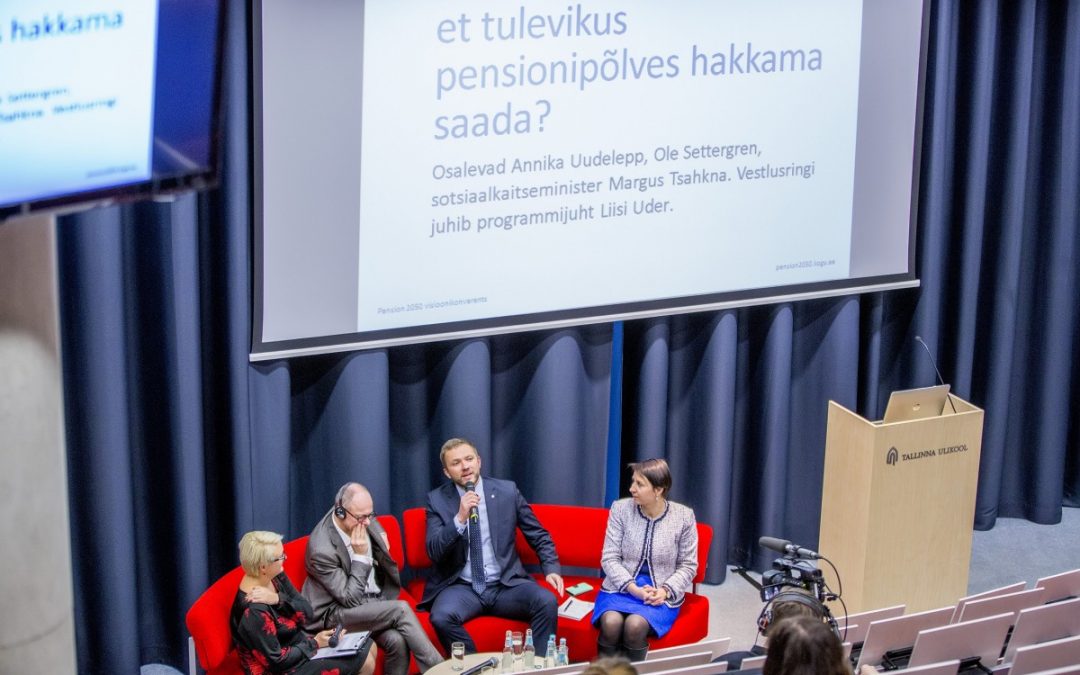 The Pension 2050 vision conference took place in Tallinn University on 4 November 2016 and introduced the concept of the “new old age”. During the conference, it was realised that, in addition to essential changes in the state pension system development planned by the Republic of Estonia Government, everything should be done to make people understand their own role in shaping their old age and take appropriate steps at a young age. The pension system cannot be successful in an aging society without increasing the personal contribution of people.

On the day before the conference, the government decided at its cabinet session to link the pensionable age to life expectancy and enable people to choose when to retire. This is a fundamental change that will affect the old age of all people born since 1960.

An economist from the Swedish Pension Board, Ole Settergren, introduced the lessons learned by Sweden after the implementation of a system much like Estonia intends to implement. Sweden also has a flexible pension age, which means that anyone can retire after reaching 61 years old at any convenient time. The pension size is related to the time of retirement: the later a person retires, the bigger the pension. However, the average retirement age in Sweden is 65 years old.

Other presentations of the conference were focused on the topics of the “new old age”. No matter how much we change the pension system or retirement age, we keep the living standards of pensioners unchanged. Therefore, much more needs to be done for future dignified old age than just changing the pension system. Tiina Tambaum spoke at the conference about our attitude to elderly people and about how difficult it is to accept our own aging – this being one of the reasons why we are not able to prepare for old age. In fact, aging is the role we need to prepare for. This presentation was also supported by financial literary researcher Leonore Riitsalu who spoke about the reasons why people do not save money for old age despite being aware that they are supposed to do so. The impact of the community and changes in social standards help improve the situation, but smart solutions and new financial services that would direct people to act in a playful way are needed in order for people to actually begin to save.

Job satisfaction expert Tiina Saar-Veelmaa delivered a positive note for conceptualising the future old age. She gave an overview of how generations born at the end of the last century and the beginning of this century feel about work and old age. As the Estonian President stressed in her opening speech, the “age after the working life” is likely to disappear in the future, but new generations do not perceive it as a tragedy. It is largely supported by the changed attitude of ongoing generations towards working. Young people want to get things done, rather than just go to work. In the future, we will not be working until a certain age but as long as we want exciting things.

In spring of this year, the “Tuleva” pension union was created. Annika Uudelepp expounded the broader impact of the union’s creation on society. One effect is the opening of a public debate on how we prepare ourselves financially for our retirement, and how much we are interested in our pension assets. In principle, this report was related to a presentation by Nigel Keohane, Member of the Board of Social Market Foundation – a UK think tank. Nigel Keohane spoke on how an increase in personal responsibilities in the use of private pension funds money impacts the financial decisions of pensioners. A large percentage of people take out their saved money after retirement and do not consider it as money that should last them until the end of their life; they just regard it as savings to be used for fun activities. An increase in personal responsibility and its acceptance must be conscious, and people should educate themselves on old age, pension assets and other topics in order to make decisions that conform to these goals in the best possible way.

The conference took place in the Euroopa conference hall in the Astra building of Tallinn University. The event was for anyone who wished to hear new ideas and discuss the subject of the future old age.
Conference materials (in Estonian and English) are available here. Videos of two presentations done in English are below, others are available in YouTube channel from here.