Is it an illusion? A participatory website allows ordinary people to participate in state government 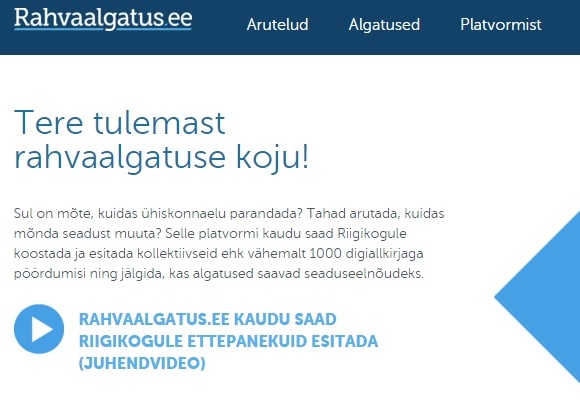 A little over a year ago, public attention was attracted by the “Let us live! “ appeal, which was initiated by the infamous writer Kaur Kender. In this appeal, people asked to change the basics of drug policy, as it is destroying the lives of young people in Estonia. As a first radical step towards a better world, activists demanded the decriminalisation of cannabis use.

When submitting a collective appeal, which received support through the website petitsioon.ee, Kender met a small obstacle in the Riigikogu. Namely – the condition of submission of the collective appeal is the presence of a signature on paper or digitally, which is set using the PIN2. However, the website petitsioon.ee, unfortunately, does not provide such a possibility. Such a minor e-bureaucratic issues did not dissuade Kender and, by 15 October 2015, he gathered all the necessary signatures and on the same day gave them to Eiki Nestor, the Chairman of the Riigikogu. On 10 November, Nestor forwarded Kender’s “Let us live!” collective appeal to the Committee on Legal Affairs, where it was discussed after three months, on 9 February 2016. Although the use and cultivation of cannabis is not supported today, a dormant participatory democracy nonetheless started to show strong signs of revival in those days. If you wish to submit a collective appeal to the Riigikogu, you can do so on the website rahvaalgatus.ee. It is a platform for debating and submitting proposals, allowing everyone the possibility to make a proposal to improve social life or change any law.

Rahvaalgatus.ee and a digital signature

The web-environment rahvaalgatus.ee is managed by the United Estonian Cooperation Assembly, which is a non-governmental organisation.

“Rahvaalgatus.ee is an electronic infrastructure that is designed to lead discussions and prepare collective appeals to the Riigikogu, as well as for submission of complaints to the Parliament and to track their consideration”, explains Teele Pehk, the head of the Cooperation Assembly. “A collective appeal is one that has at least 1,000 signatures and is aimed at improving the organisation of social life, to initiate any law or to change a law”.

The website rahvaalagatus.ee was opened in March of this year and it was financed from the budget funds. “While creating a constantly updated or beta version of the platform, which can be used in Estonian, English and Russian, we cooperated with the Chancellery of the Riigikogu, which is responsible for following the rules and terms of consideration of collective appeals”, says Pehk. “From this autumn, the rahvaalgatus.ee team began educational activities in the field of civil rights and opportunities that facilitate participation in the direction of three target groups: young people aged 16 years and older, elderly people who are able to use electronic technologies and Russian-speaking residents”.

Six initiatives were forwarded to the Riigikogu through the website rahvaalgatus.ee and, according to Teele Pehk, the Commission has not adopted the final decisions yet. “These were mostly topics related to the environment and nature, such as the protection of flying squirrels, the planning of Rail Baltic, saving the ecosystem of the Väike väin strait, prohibition of glyphosate and the legalisation of medical marijuana”, lists Pehk, adding that signatures are now being collected for two more initiatives, one of which seeks to analyse the impact of a citizen’s income.

Using rahvaalgatus.ee, six initiatives have collected a total of more than 10,000 signatures. In March, the number of users of the platform rose to about 70,000 people.

“It is important to emphasise that the digital signature (PIN2) and the authentication (PIN1) have different legal weight” says Pehk of the features of rahvaalgatus.ee. “If the Riigikogu receives a list of signatories whose identity was created through the bank, e-mail, Facebook or PIN1, the message is considered as a memorandum. However, if you insert a digital signature (PIN2) under initiatives submitted through rahvaalgatus.ee, in this case, the Riigikogu will treat them as collective appeals, which require at least 1,000 signatures”.

Web-based participation of the State Chancellery

“The website for e-participation, osale.ee, was established in 2007, and it is where everyone can publish their opinion on the draft laws at the stage of public consultation”, says Liis Kasemets, a strategic advisor of the State Chancellery, in detailing another opportunity to participate in the discussion of public affairs. “Using this environment, it is possible to send suggestions or ideas to the Government or the Ministry”.

According to Kasemets, osale.ee is combined with the central information system of EIS draft laws. If a public consultation is initiated on the draft law, then all interested parties are invited through the osale.ee channel, where you can send your opinion to the Government.

In the early years, the Government received up to 175 ideas and proposals through the website per year. “Today, in addition to sending their own opinions, people are utilising other possibilities of the e-environment”, says Kasemets while writing down the last modest figures of the triumphant march of social media.

According to Teele Pehk, the head of the Cooperation Assembly, administration of osale.ee is very passive, which is why it has only a small number of active users. Pehk gives a very good assessment on the functions of osale.ee; however, the State Chancellery could be more active in promoting and developing it, by also making it more convenient for the end-user.

The petitsioon.ee website of the Estonian Central Union of Owners appears to be (by unconfirmed data) the oldest and still operating electronic form for the submission of petitions and collection of signatures to support initiatives. petitsioon.ee was launched as an independent service in March 2010 with the support of the civil society endowment. “We immediately became famous because nobody offered such an opportunity at that time “, says Terje Riimaa from the Estonian Central Union of Owners.

For example, the most important petitions that gathered support through petitsioon.ee were:

“For nearly seven years, more than 600 petitions have been published, about 180 of which are now in the public domain, but the collection of signatures in support of them has already ended,” says Terje Riimaa. “We have not been able to publish all 1,500 petitions, because their texts, unfortunately, did not meet our user conditions. There were some petitions that for several months only had the signature of the initiator”.

As of the last day, it is possible to express support for four petitions on the webpage petitsioon.ee.

In the interest of truth, it must be added that petitsioon.ee is a platform on which, unlike another platforms, a one-time fee for publication of a petition is 30 euros. The ability to publish petitions and submit proposals is also offered by the petitsioon.com webpage, the origin of which, or administration of which, in comparison with other websites, is much less known. “We have nothing special to tell about them – it is indeed a very mysterious channel”, says Teele Pehk, the head of the Estonian Cooperation Assembly.